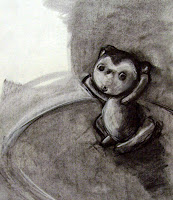 Have been struggling to paint the last few weeks while I wait to hear back from a gallery. So with Damien over to have his semi-regular drawing session I decided I'd take the opportunity to get back to basics and do some studies of some of my new lovelies. This is one of the delightfully worried bears/mouses that arrived this week. I'm not sure what it says about me but I do tend to cackle an inordinate amount whenever I see such cute little critters looking so distressed. I know it's wrong - but I'm cackling as I write this. Deary me.

I can't wait to devise some frought situations for them in full colour. Hmm, and so returns the inspiration!
Posted by Unknown at 9:52 PM No comments: 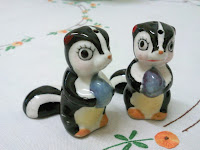 These lovely little skunks came to live with me this week - fleeing high unemployment in the US. They have sought refuge in my studio as parity paid models. They have recent company in some Enesco bears, and deer. I'm going to need a wild-life reserve soon!

Long live parity!
Posted by Unknown at 2:44 PM No comments:

My little donkey painting has been selected for the Eutick 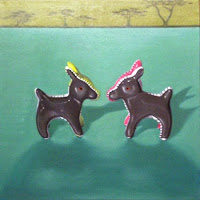 I'm still doing my little happy dance after hearing today that my still life painting 'Head On' has been selected for the Eutick Memorial Still Life Award at the Coffs Harbour Regional Gallery. The exhibition will run from 12th November 'til the 15th January.

They're such good little horsies!
Posted by Unknown at 9:59 PM No comments: 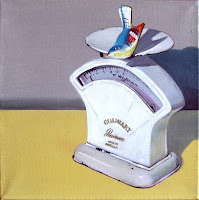 Amidst SALA tweaking of videos and presentations, teaching commitments and nipping off to Melbourne for the Art Fair I've managed to complete 15 works for my vanitas series.

I've decided to call the series "Measure for Measure". It satisfies me on several levels - as they are about the way we reflect on the passage of time in our lives and they also incorporate measuring devices and items that have passed from fashion.

This one, 3/4ths of an ounce is my current favourite. The title refers to the research of Dr. Duncan MacDougall, who in 1907 published his studies into the weight of the human soul. He conducted several tests in the form of weighing dying people immediately before and after their deaths. His first result from the death of a man dying of TB resulted in a weight loss of 3/4ths of an ounce as determined by the beam scales that had been placed beneath the framework of his deathbed.

Three more large works to do, and one small and then I shall release them in to the wild.
Posted by Unknown at 9:53 AM 1 comment: 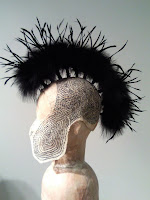 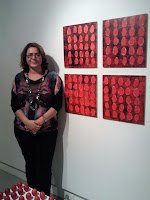 I don't really get to a lot of openings, but today was an exception. In the blustery chill afternoon Hans and I travelled to the opening of Niki Sperou's exhibition the Golden Fleece at the Prospect Gallery. Niki makes thoughtful works by hand that are imbued with the invested energy and meaning that builds up in an object which is painstakingly crafted. Making art which is driven by personal desire lends it a special quality that I personally treasure. It's like the hand-made quilt that my grandmother made me, or indeed every painting I create from stretching to varnish. These are are loving acts of creativity which give expression to the simple acts of being. Well done Niki!
Posted by Unknown at 4:44 PM No comments:

After weeks of forced discipline I woke up on Monday morning with the correct head attached and started painting. I've finished two pieces already this week with four in progress and five more to mark up. It's very satisfying to finally find where I left that bookmark in my painting brain.
Posted by Unknown at 11:58 PM No comments: 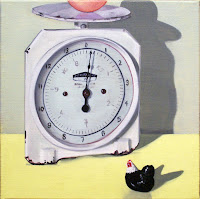 Having completed the agonising but deeply rewarding video process I've been trying to get my head back into paint-space. It's not really happening yet, but I'm still pushing for at least an hour a day to swish some paint around. It's a good time to get some R&D done for the current body of work. I have around 15 pieces either done or on the go, but I really need about another ten to feel comfortable. Sadly off the wall in Sydney has been cancelled. I had hoped to debut this body of work there, but c'est la vie, the universe has other plans... I just hope She knows what She's about.
Posted by Unknown at 9:03 PM No comments:

the reflecting pool - a moving image 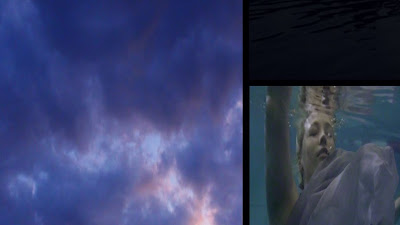 As it evolved it became evident that there was a strong meditational quality to this piece - so the name evolved as well. I had intended this piece as a Nocturne, but it had other plans.
Posted by Unknown at 9:45 AM No comments:

There are moments of Zen in art and then there are moments of mayhem. Such as finding out your video proposal has been accepted for the SALA Moving Image Project, tempered with the knowledge that you have 15 days to cast, scout for locations, make costumes, book equipment, film, capture and edit and present a meaningful work.
It certainly sharpens the mind to have that adrenalin boost.
Day 1: In the last 12 hours I have managed to sort locations, waiting to hear back about a potential actor and am still wrapping my head around all contingencies.

Day 2: Spent the day teaching and chatting with friends. Friends are good. Friends are brilliant. Friends have given me two potential performers. Will know today (hopefully) if I have a body to film.

Day 3: Will do a test run of the location shots today down at the Torrens River to see if my handycam has the resolution to pull this off rather than hiring the big guns.

Day 4: Filming at the river went relatively well, except I forgot about the psychotic swans. Will need to reshoot when I have little more time for the birdlife to zoom in on me, start circling the wagons, get bored and move on.

I have an actor! Will film her drowning poetically in two days. I love it when a plan comes together!

Day 6: Test filming of the body on water at the Aquatic Centre - worked very well, will film the real bod tomorrow.

Day 7:  After school meetings and working on the Mother's Day stall all morning, filmed at the Aquatic Centre in the afternoon. Soooo tired. Beautiful shots of my lovely actor, though. Will start playing with them now to see how far I can push these handycam images. I'm a little concerned about de-interlacing when I slow this sucker down.

Day 8: Took extra river footage in the morning and have started the long process of first pass editing. I'm cutting the messy stuff out of each scene and then rendering it from mpg to avi which seems to be solving the de-interlacing issue. Now beginning the fun process of trawling through all the footage and pasting together something beautiful, meditative and moving... not much of an ask.

This is also the stage where the disparity between my initial vision and the what I was able to actually capture on film becomes apparent. You can't get caught up in driving a fixed vision. To paraphrase... artistic proposals can't survive contact with the enemy... um, camera... um actor?

Day 11: All preliminary editing is now complete, ie trimming the footage, and clarifying colour, brightness, hue etc. I'm now onto the fiddling about with composition. I've been thinking a lot about the deconstructed video; displaying the individual elements of the work separate to one another yet in the same frame. More thinking and playing to be done.

Day 13: Head down and finished the first major edit. The overall composition is quite simple and I feel like I haven't done enough yet - I usually agonise for longer. This is the point in the process where I have to remind myself to trust my instincts and keep it simple and to the point.

Rendered overnight (7 hours) and eyeballed first thing. Will need to make some small refinements and re-render. Some parts work well, but I think I'll speed some of it up and add another section.

Day 17: Fourth major revision of rendered work; cleanup and tweaking. And rendered again. Hopefully this is it.

It's a good thing there's been a deadline extension. But I feel ahead of the game and able to perfect the piece.

A portrait is a funny thing. You meet a person a couple of times and try to tap into what it is they're really after. It's about those secret fantasies and yearnings we have about ourselves and never really have the courage to admit in public. Taking a commission is kinda like being a chaplain again. Encouraging the sitter to open up and trust you to reveal something deeply personal about themselves.

And then you spend weeks and months with it building the layers of skin and fabric, building a likeness and a sense of sensuality about the surface. By the end I always feel as though I am brushing the skin of the sitter. That's when I know it's finished; when it has it's own life. And then I have to part with the person who has inhabited my space and life for all those weeks.

Marsha collected her portrait this evening, the rain just started and and I can move on to the next piece.
Posted by Unknown at 7:33 PM No comments:

Another Pot of Tea

It's a blustery Autumn day and perfect for playing with this new site. The cats are curled on my easel chair and under the lounge carpet, noses down. As I should be! So, another pot of tea and back to devising quirky, yet poignant compositions to delight and disturb... well hopefully.

So, to focus the mind: the art of composing; rules I have placed on myself to keep this new body of work coherent
the rules:

1. 12" x 12" (Small and compact, fast to paint!)
2. inspired by the notion of the vanitas (death and the fleetingness of life is always fun)
3. a scalene triangle of objects (well, I can't help it. I've been doing Ikebana for too many years)
4. There needs to be a face, ie on a ceramic figure or a clock, (for empathy)
5. things represent other things, ie a box represents a nest (symbols within symbols)
6. the objects must 'talk' to one another (because I like to talk to them too)
7. and the palette is drawn from 'small treasures'

finished pieces
Posted by Unknown at 10:49 AM No comments: